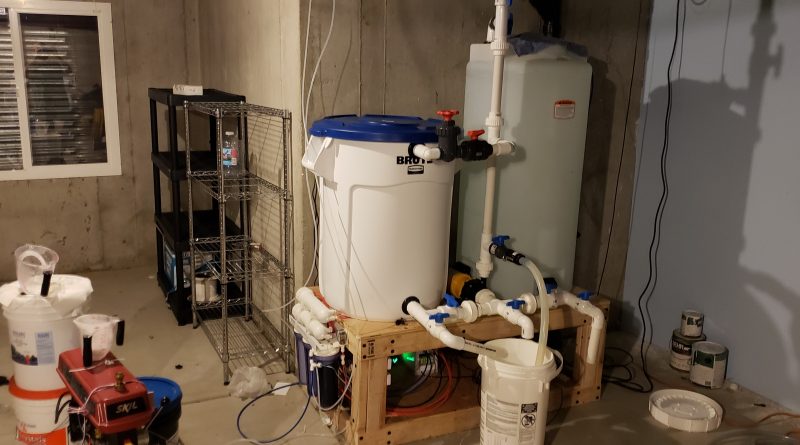 I have built a few mixing stations and RODI holding tanks at this point in the hobby, although my latest iteration is the largest and my favorite of the bunch. It’s driven by a Panworld 200PS, which can do over 1750GPH at 39′ of head. I wanted this to pump to my 2nd story from my basement, and that it can do!

The main drain bulkheads coming off both tanks are 1.5″, as well as the two center valves leading to the pump. However, from there, most of the other valves and plumbing is reduced to 1.25″, including the valves off the front of the tanks and pump. This is still all over-sized given the pump is all 1″, but upsizing the plumbing by one greatly reduces the friction and means I never have to worry about flow reduction from angles or elbows. The return plumbing is also likewise, all 1.25. The salt bucket has two return valves, this was upgraded as my original ball valve here developed a leak, due to me often leaving it half-opened when mixing salt or pumping upstairs, wearing the valve out prematurely. I now have a gate valve to adjust the flow, and a rebuildable union ball valve to act as a flow shutoff. If money was no object, I think I’d use rebuildable valves everywhere. Fortunately, the setup was designed with appropriate unions and threaded fittings, so most if not all pieces could be replaced and rebuilt, if need be. 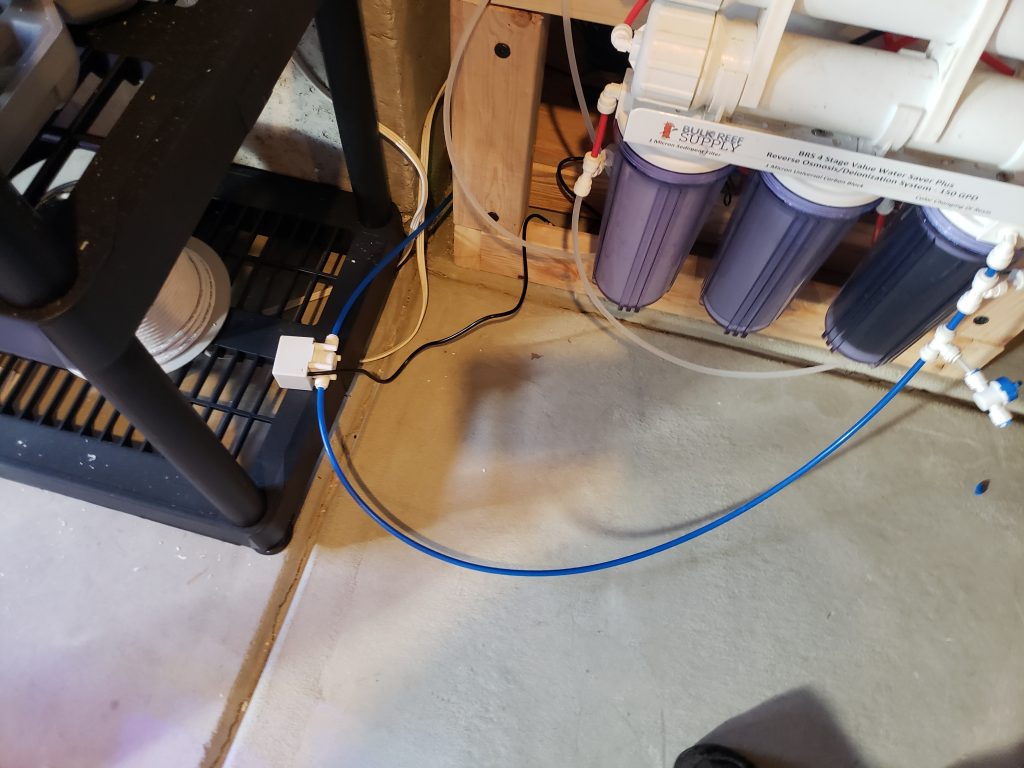 The RODI system is a BRS 4-stage unit with dual RO membranes that’s been additionally upgraded with the aquatic life smart buddie booster pump. I’d probably have just gotten the aquatec pump in hindsight, but I did recently discover it’s possible to open it up and adjust the high pressure shutoff, so I’m hating it a little less now! It’s got a total of 6 TDS meters, 2x triple meters. The first meter measures incoming, post-carbon/sediment, and the final DI output. The second meter is focused on my RO membranes, and measures the output of the 1st and 2nd membrane separately, as well as the combined output of both. There is also a flow meter placed just after the combined output, showing me the rate of product water produced. Black friday couldn’t have come sooner – and a 2nd flow valve was installed at the input, showing me total, and product water, at which point i could subtract the two to figure out waste. Lastly, the RO is tee’d off and ran over to my kitchen sink, where it feeds a pressure booster tank, an alkalinity replenishing cartridge, and a final carbon post-stage.

The RODI output of the unit goes to a solenoid, then to the RODI tank. The tank has a traditional float valve, which for much of it’s life served as it’s only shutoff. Recently, I upgraded this with a dual float: 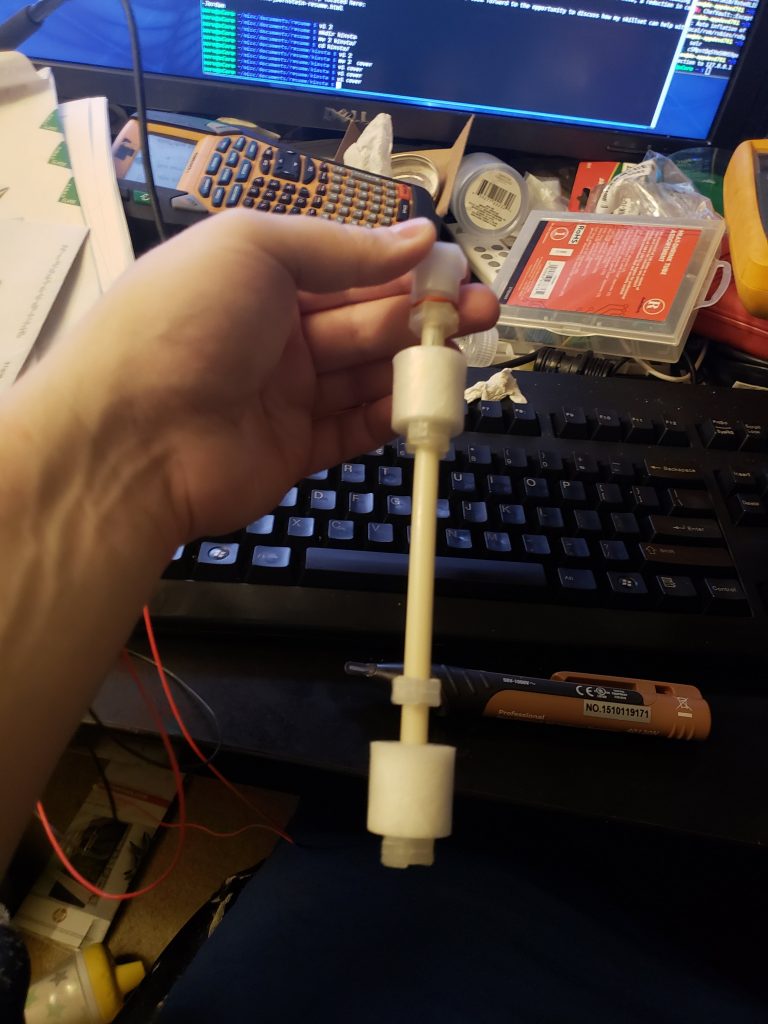 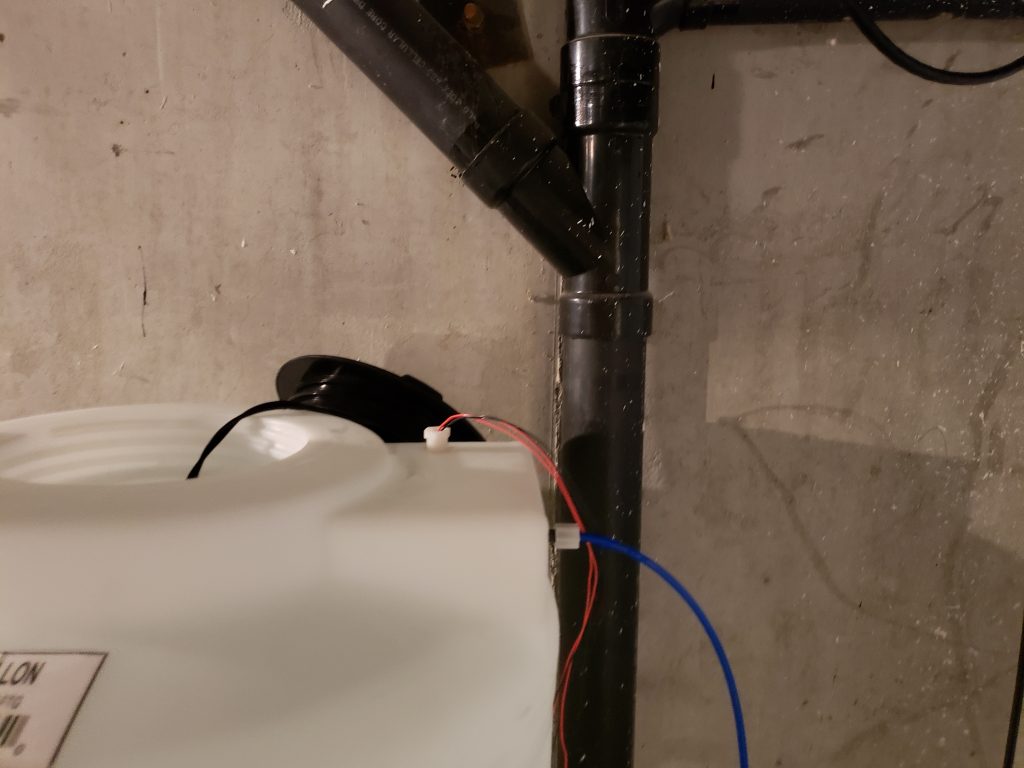 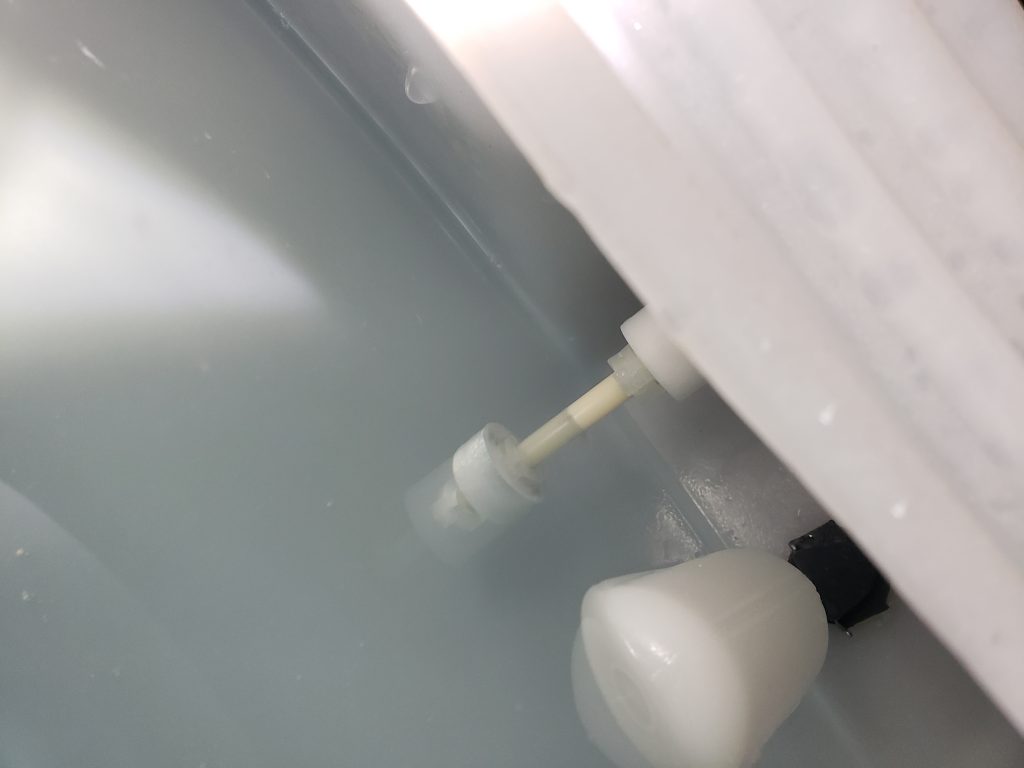 This new setup allowed me to do multiple things, originally I used the top float as an emergency shutoff, and the bottom to turn on/off the solenoid. However – this wasn’t what I really wanted, and I bought a few couplers/nipples to extend the switch a little further into the tank. I then re-configured this to a latching setup with the apex – where the low switch must be hit – and it then fills until it reaches the high switch.

Using the solenoid and my apex programming, I’m also able to de-bounce the electronic float valve, which is something I cannot do with the mechanical one. However – if this electronic setup were to fail, it would still fall back on the mechanical valve. There’s one additional safety mechanism as well: my leak sensors. If either of those are triggered, not only does the solenoid shut off, but the RODI booster pump as well, effectively shutting off the mains water supply entirely. One additional thought I have now that there’s going to be a flow meter on both the input and the product water output, I will now be able to tell if there’s water coming in, but not coming out, which might indicate a slow leak somewhere in the system.

As mentioned prior, the system is capable of pumping upstairs. At first, I was hoping to be able to hard plumb it directly to the 2nd floor but due to where the beams and structure are in my house it’s not easily possible. That said, the 1.25″ return plumbing comes out in the closet right next to my 60g reef. From there, I’m able to attach a hose and run it up the near-by staircase, which allows for the upstairs tanks as well. I experimented with different size hoses, at first, I tried 1/2, later, I built a 3/4″ hose and this greatly improved flow. I would like to further yet build a 1″ hose some day, but it is cost prohibitive at distance to say the least. In addition to all that, I’m able to actually pump salt all the way out to my driveway, which comes in handy if you ever have a friend in need….